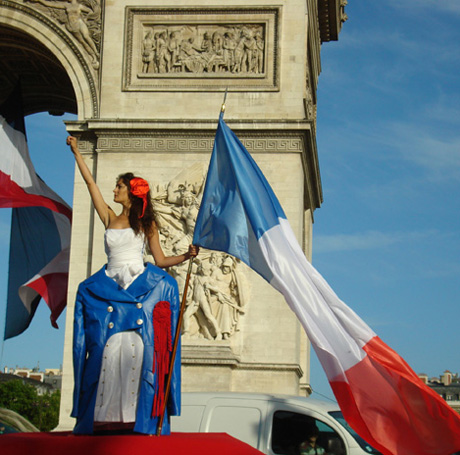 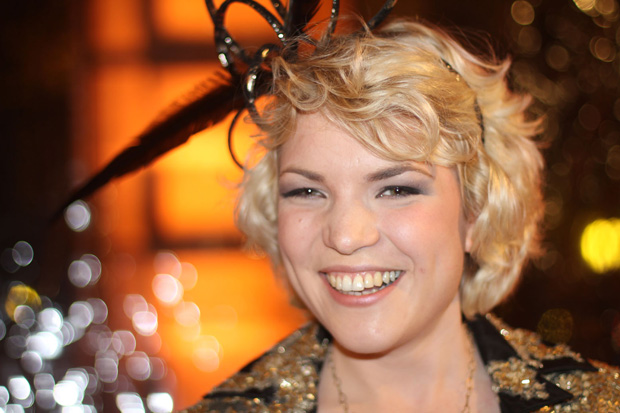 Isn’t it funny that it should be a young 26 year old Austrian designer, arrived in Paris two years and a half ago, who decided to pay homage to century old French savoir faire in couture? Given the disappearing of that French savoir faire and the general lack of private and public initiatives to remedy to that situation, it is my turn, here, to pay homage to both the entrepreneurial and communication skills of the duo made of designer Anna Barbara Aϋmuller and creative director /photographer Damian Lucca, from Q’lab, a brand new self-defined “idea, trend and style laboratory”.

The « event dress » concept or the lifelong dress

Have you indeed ever wondered where those pieces were ending up after couture shows? From the start, the fate of the corporate dresses was clear.  They would be exhibited whoever the organizer would be (professional, commercial or public), before ending up in a private fashion museum within 3 years. After one year and a half, the plan came into reality.

Her dresses have been shown to fashion professionals on trade fairs as Première Vision, Cuir à Paris or Mod’Art , as well as to the public, in the streets and places next to the regular haute couture fashion show venues, last summer. The designer went as far as to dedicate other dresses to certain nations, cities and arts.  The whole concept did appeal so much that 22 travels are now planned abroad. The history and savoir faire of the French artisans will get a chance to gain some visibility abroad thanks to the dresses.

In time of sustainability issues, the ʺcorporate dressʺ concept completely makes sense in its embodiment of regional savoir faire in a highly global luxury industry. The Femmes Fatales collection got a lot of artisans ‘approval to contribute for free to the collective homage paid to them. Participating to a collection dedicated to their own savoir faire made artisans enthusiastic about the initiative. Some suppliers did offer her a great amount of materials. It meant getting their names on the front scene and a bit more recognition, which is neither what they are used to nor know how to do. This initiative also meant dedicating a series of dresses to the paradoxically essential yet disappearing French savoir faire in couture, at the heart of what French luxury is about.

Here are 3 dresses, you will recognize « Shirpheard girl » paying homage to wools, « Butterfly » to industrial embroidery and « Love&Passion » to corsetery. I have to add that I found the dresses really amazing when I looked at them closely in Anna Barbara’s atelier ;  one really feels the textures and details of the work. 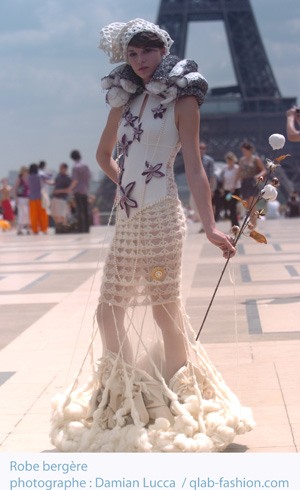 Anna Barbara Aϋmuller turned out to somehow become the ideal PR to value their savoir faire. The dresses turned out to illustrate savoir faire in the work of leather, fake fur, silk, rubber and new materials, wool, linen and hemp, handmade and manufactured embroidery and lace design. This is how Paris-based Austrian designer Anna Barbara Aϋmuller gave her couture dresses a second life. She decided to make a name for herself as the designer of “corporate dresses”, promoting savoir faire in haute couture, with the friendly support of Vivienne Westwood she worked for, before collaborating with Chloé, Kenzo or Paul Ka.

From this great win win communication strategy for the aspiring designer and the couture makers, the designer won credibility and now wishes to create what she calls « grand luxe » pieces for private customers as well as for brands. She plans to further collaborate with the artisans for such pieces. of For the aspiring designer, it has been a terrific opportunity to get access to the haute couture French artisans and make the most of that opportunity to show her creativity to all.

Will her corporate couture street show become a regular fashion maverick event dedicated to independent French artisans?  She did not plan it.  It’s a pity for there obviously is a need for that type of events openly praising all kinds of  French savoir faire mostly left unknown to all of us, except for the 7 artisans belonging to Paraffection (to be translated « out of affection »)  owned by Chanel.*

From Parisian streets to the Embassy !

The Austrian Embassy has been the last Paris venue for some of her corporate dresses. How did she manage to make it? Well, Anna Barbara simply wrote to French President! She let him know about her whole initiative and her commitment to French savoir faire. Thanks to a response from the French Ministry of Culture, she got in touch with the Austrian Embassy in Paris. She has designed the dress to celebrate Austria’s National Day at the Embassy.