Organized by the Espace Fondation, the EDF REHAB, the art of re-making exhibition questions the possibility – even the necessity – of giving new life to used materials – to waste. Metamorphosed, the neglected material becomes a singular work of art with enchanting green imaginaries. 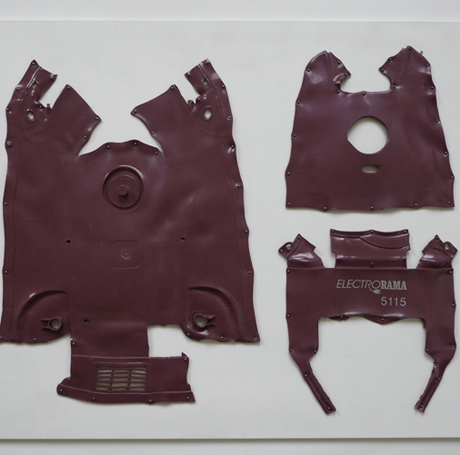 The Paris-based Espace Fondation of EDF often does a great job at choosing relevant artworks both questioning sustainability issues and truly conveying some sense of enchanting aesthetics. Here, the usually simplistic green artistic discourses is being challenged by REHAB, the art of re-making, re-enchanting artistic uses of this increasingly prolific and problematic material, waste. 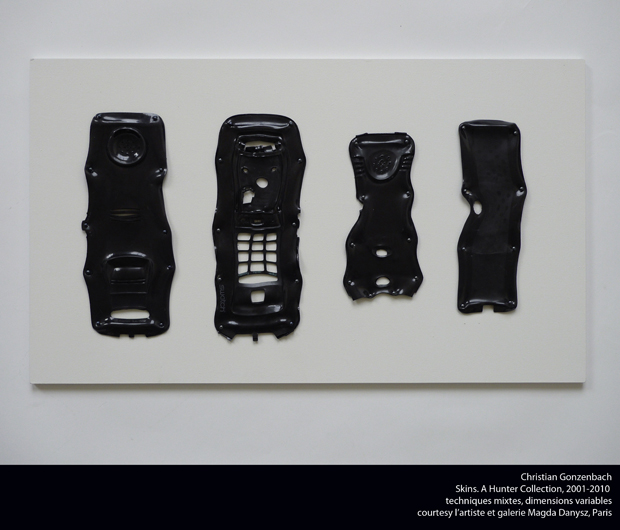 The Swiss Christian Gonzenbach, whose art piece is entitled Skins. A Hunter’s Collection, turned himself into the typical 17th century naturalist amateur who would bring unknown species of animals back home from his journey to the New World. He would passionately dedicate himself to the study of his findings and exhibit them in his cabinet of curiosities, later to give birth to the concept of museum.
As an amateur of plastic waste, the artist collected his 2001-2010 plastic waste findings he pinned up in unfamiliar ways, from below, from the side, from inside, on these walls dedicated to art exhibition.
Although originally part of our daily life, the pinned up objects definitively remind me of animals having been skinned, and then exhibited as iconic items. Hair-dryers, televisions and printers have been dismembered to retain their plastic carcasses. Forms and colors stand out, which gives the collection of plastic waste some sense of abstraction.

It‘s as if it was about discovering the secret waste kept for itself inside its body, as if those objects were as mysterious to him as those unknown species of animals to 17th century naturalists.

Would this plastic waste has something to reveal to us, perhaps another re-use of it not found yet? We are made to consider the issue of globalized waste plastic pollution with a fresh eye. We are asked to look at these consumer goods we have thrown away.

Of course, his artistic proposition reminds me of what I would like to do in this blog: somehow dismembering some images of couture and have other realities to emerge. What about considering a bit of the tools of the trade of the master craftsmen’s disappearing know-how, albeit well-known worldwide and at the core of French luxury? 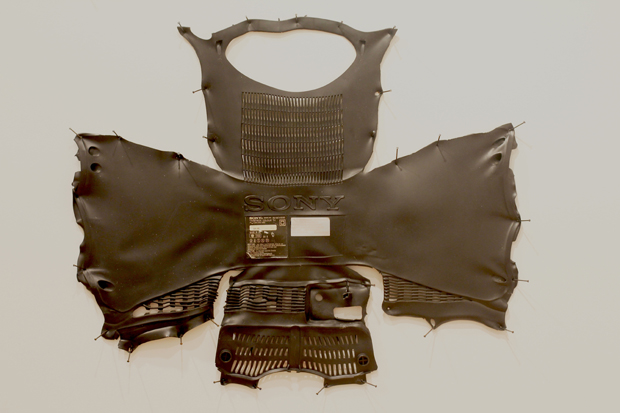 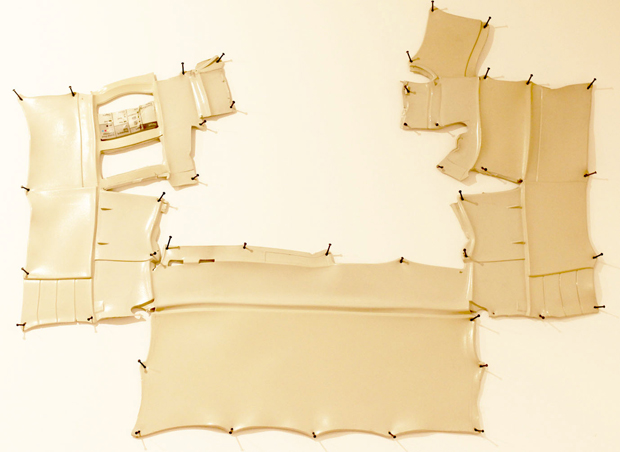 Here is a corporate film commissioned by the French Pechiney group in 1958 to French director Alain Resnais. Mass consumption was then at its early stage.

The couturier for cardboard

No, this is not wood, this is cardboard! One has to come forward and look closely at the details. Here we are in front of a made of cardboard sculpture! The artwork by Eva Jospin-Thoretton, and entitled Forest, interprets the forest’s vital vegetal components of trunks, branches and leaves with waste, cardboard. She succeeds in creating harmony out of this unexpected matching of imaginaries.
The artist has been working for several months to achieve these sculptural details made of a poor material, cardboard. In this sense, her artistic approach is entrenched in tradition: her artisanal savoir-faire in cardboard design is essential. It’s outstanding. Her work is beautiful in the classical sense. Her commitment to refinement and details in her cardboard design can be related in its approach to the master craftsmen’s commitment to uniqueness and details too.
Yes, the artist is like a couturier for cardboard! She reveals the astonishing refinement made possible in cardboard design.That cannot be compared to useful cardboard items like cardboard bookcases or cardboard chairs, for instance, because the artist’s use of the material is here useless. It’s art. Here, we are feeling like admiring at the forest.

“A completely artificial and dreamlike exploration of the « green » issue” 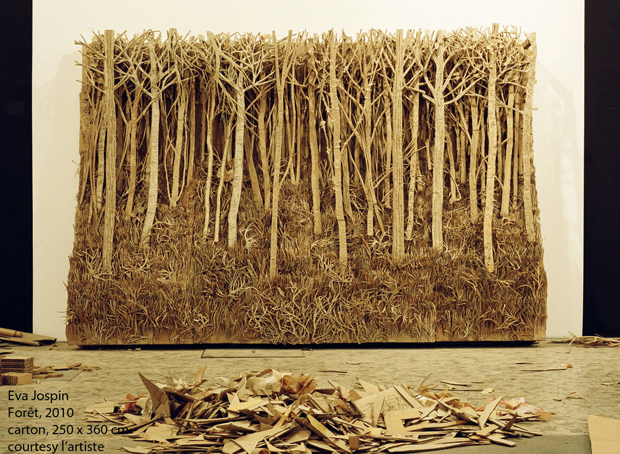 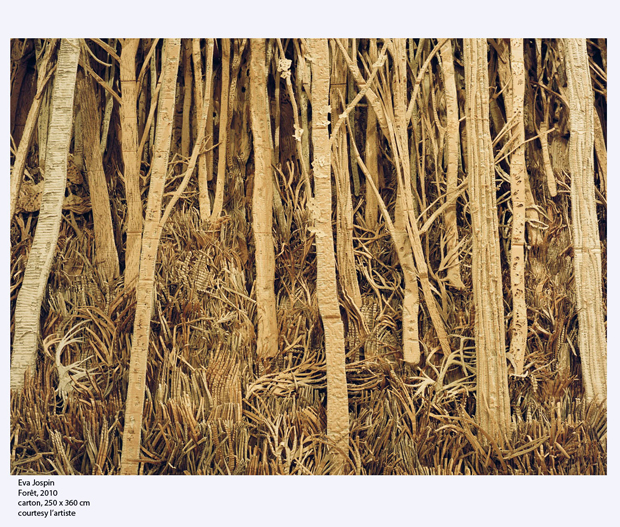 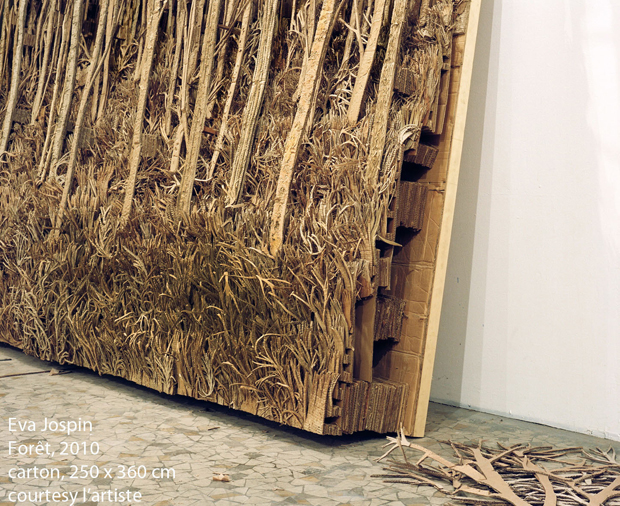 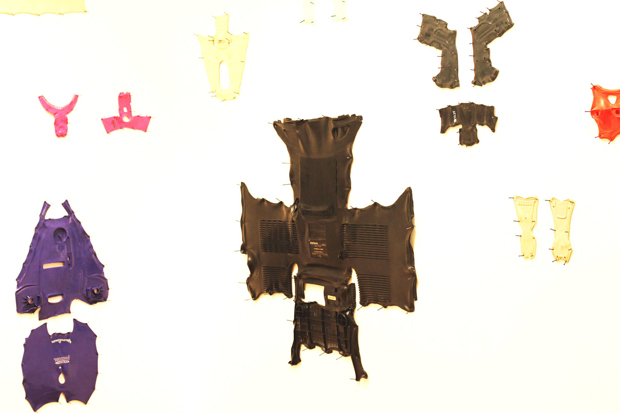